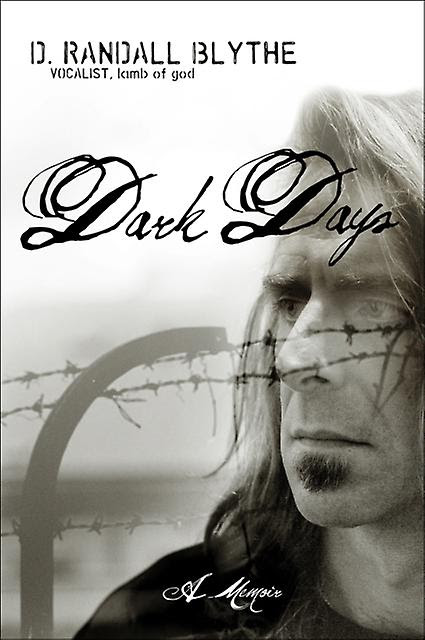 I’m a bit embarrassed to admit that before I was asked to read and review “Dark Days A Memoir” by D. Randall Blythe, I really didn’t know much about the author or his band, lamb of god (before you correct me, yes, he writes ‘lamb of god’ all lowercase).  Once I read his spectacularly well-written book, however, you can bet I made it my business to find out!  At any rate, the first thing I discovered as I read is that he is known to friends and fans as Randy, and his last name, Blythe, rhymes with “fly,” rather than being pronounced like “lithe”.  Randy’s writing style is so smart, such beautiful and interesting prose, I began to wonder who he may have used as a ghost-writer.  To my chagrin, a few chapters in, he dispels this idea by emphatically informing the reader that he did indeed write every word of the book, and fully intends to write more!  At this point I was intrigued and tore through the book reading like a demon, his story and the telling of it is that incredible!

Randy’s journey begins from the road where the band was on tour and had just flown from Norway to the Czech Republic.  He eagerly looked forward to having a rare “day off” in Prague.  Mr. Blythe is a rather gifted photographer, as I later delightedly found by following him on Instagram (highly recommend it!); but at the time the book describes, he was anticipating strolling the streets of scenic Prague and catching some shots of the incredible history and ambience.  All that dream went up in smoke when he was arrested before he was even able to deplane!  In his confusion and fear, he was made to understand by Czech authorities that he was being charged with the assault of a fan when lamb of god played Prague a couple of years prior, and that the fan had succumbed to his injuries after being thrown or knocked off the stage – and died!

We join Randy on his bizarre odyssey of being charged, incarcerated, and dealing with the horrifying realization that he may never be a rock musician – let alone a free man – again!  He takes us along with him in a most courageous and personal way, as he must grapple with the uncertainty of his fate while navigating life in a Czech Republic prison, where every aspect was so foreign it’s a wonder he was able to maintain his sanity.  Fortunately his inquisitive mind and newly found sobriety helped him cope.  As the days wore on, he was able to establish a camaraderie with his cell mates as well as privately deconstructing his situation; coming to the eventual unsettling acceptance that he may have had something to do with the death of the young fan since he had still been drinking at the time of that show.

Ultimately, he is able to find strength in the love and support of his wife, family, band mates and fans.  He is convinced that his sobriety was in no small part responsible for helping him reach a positive outcome in this excursion as well.  You will need to draw your own conclusions as to whether you agree… but I guarantee you will be enthralled with this man’s remarkable trek through hell and eventual redemption through legal and personal strength.  By the Epilogue, you’ll celebrate Randy’s triumph.  And if you’re like me, you’ll have fingers crossed that we soon see future tomes from D. Randall Blythe!