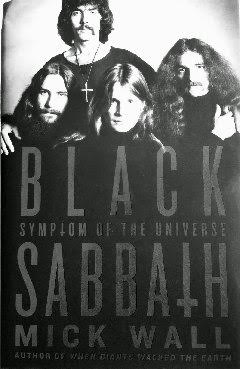 If you have ever even liked a heavy metal song… then you will enjoy this very well written, thoroughly entertaining book. But if you have ever been amongst a crowd of thousands of sweating, screaming metal fans, hands formed into devil horns and thrust skyward while banging your head to a bone-shatteringly loud band on stage – and you were in your “Happy Place”… then you should stop reading this immediately and run to your library, e-reader or whatever other delivery source of your choice and check out “Black Sabbath: Symptom of the Universe” by Mick Wall!
Mick knew the members of Black Sabbath from the early days, and worked as their publicist at the pinnacle of their success in the 1970’s. Thus he writes with the unique perspective of both a first-hand observer and participant in their personal and professional victories, failures and outrageous behavior throughout it all.

Black Sabbath started with the unlikely union of, in Ozzy’s own words, “four fucking dummies from Birmingham”. Tony Iommi, Terry “Geezer” Butler, Bill Ward and of course, the one and only Ozzy Osbourne. They initially formed a band more out of convenience than of any great affection for one another; and then proceeded to practically back into their fame. The music business at the time scoffed and criticized endlessly, comparing them unfavorably to everyone from Led Zeppelin to Jimi Hendrix. But to the local young outcasts and misfits, Black Sabbath became gods. They were loved, as Mr. Wall describes, as only kids can love.

From the sketchy fits and starts beginning of the band, Mick Wall takes the reader on a roller coaster journey that eventually finds Black Sabbath credited for inventing heavy metal music. From the roots of that first taste of massive success grew the beginnings of their eventual plunge into excess. Alcohol and cocaine-fueled outrageous behavior, while seemingly almost magical fun in the short-term, can eventually take a hefty toll on even the most robust of personalities. And most of the members were simply not equal to the challenges of the long-term absurdity.

Attempting to outrun their almost certain demise, they moved around, hoping new environs would provide the isolation they needed to renew their dedication to writing and recording. Tony Iommi, in particular, became almost obsessed with spending endless hours in the studio seeking perfection in every note, every lyric; but never quite finding it. This eventually splintered the foursome to the breaking point, and Ozzy found himself fired from what he essentially considered his band. Tony Iommi began working with Ronny James Dio and a new sound for Black Sabbath was crafted. It would not be long-lived. But Ronny James Dio is credited with one historically significant aspect of metal: {spoiler alert} he started the Italian-born tradition of flashing the extended index and pinky fingers, which was soon thought of as devil horns, and to this day is a common sight at rock shows and pretty much anything metal-related.

Of course Ozzy needed a new band if he was to continue his addictive life of a rock star, and through help from various friends and associates and a certain amount of just dumb luck, he happened upon various musicians that formed the Blizzard of Oz. One of these was a special favorite of mine, Randy Rhoads. For any of you who loved Randy as I did, Mr. Wall’s telling of this part of the story will be of particular interest. He describes in great detail the short-lived though incendiary music that formed from this union. And ends with the heart-breaking details of Randy Rhoads’ tragic and far-too-young departure from music and the world following the crash of a small plane he boarded for a quick spin with band seamstress Rachel Youngblood and band tour bus driver Andrew Aycock piloting.

Yes friends, if you have even a passing interest – and particularly if you have loved – Black Sabbath and the incredible ups and downs, twists and turns this legendary band has navigated over their many years (hammerheads, you know who you are!), the music they have managed to produce that has left its indelible mark on rock history, and the many fascinating members of the supporting cast in their amazing journey, you will love this book. Mick Wall’s writing is at once brilliant, wildly funny, informative and occasionally shocking. I promise you will not regret a moment of the time you spend reading this tome. And as Black Sabbath is currently embarking on their farewell “The End is Here” tour, reading this excellent book could not be more timely.