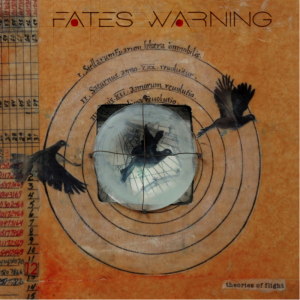 FATES WARNING’s new album is entitled “Theories Of Flight” and comes packaged with unique artwork (which can be seen above!) created by Michigan artist Graceann Warn / www.graceannwarn.com

FATES WARNING guitarist and main composer Jim Matheos comments about the title and the artwork for the “Theories Of Flight” album as follows: “The working title for the album was “The Ghosts Of Home”‘ and the song with that name was first called “Home Again”. When I started searching for artwork I came across the piece that’s now the cover and it was called “Theories Of Flight”. In fact, the title you see on the cover is part of the original art, not something we added. There’s a loose theme running through a lot of the lyrics, and this developed organically and separately, where Ray and I are often writing about various uprooting, escapes….flights. So I was immediately drawn to that phrase as being a better description of what some of the songs are about.”

The tracklisting for “Theories Of Flight” reads as follows:

A limited 2CD version of the album (and also its 2LP) will include an acoustic bonus-disc with the following tracks:

In related live-news, FATES WARNING are about to perform two special 30th anniversary-shows for their classic “Awaken The Guardian” album.

These live-appearances in the original album line-up (featuring John Arch on vocals) will take place at the sold-out Keep It True festival in Germany / www.keep-it-true.de on April 29-30th and at the sold-out ProgPower USA festival / www.progpowerusa.com on September 9-10th.