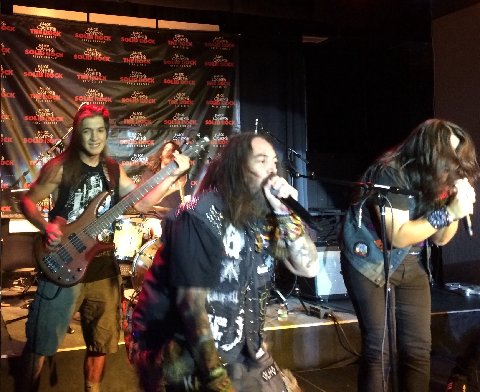 The Alice Cooper’s Solid Rock teen center is described by Alice himself as “A creative sanctuary for teens, allowing them to build confidence and discover their passion through music, dance, self-expression and creativity”. Unfortunately now is a time where public schools are cutting funding for empowering programs like music and dance, The Rock cultivates a love of the arts to inspire teens to embrace artistic excellence and avoid drugs, guns, and gangs. It was through Alice’s Solid Rock Teen Center, when 5 young guys in a band called Ironkill tried out for Christmas pudding contest of 2013 and 2014, that they met their coach and mentor Court Stumpf. Court Stumpf just happens to be the guitarist of the band Co-op headed by Alice’s son Dash Cooper. 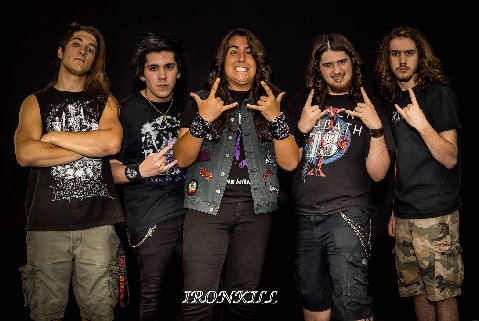 Those five young men of Ironkill are; Michael Montana (guitarist age 17), Reilly Mikus (guitarist age 16), Hayden Fiedler (bass age 17), Steven Montana (drums age 14), or Joel Rodriguez (vocals age 16). How could they have known that being involved with The Rock and working with Court would one day lead to them actually playing on stage with the legendary Max Cavlera, their idol? Ironkill was quoted as saying” Court approached us at our weekly practice and told us that Max Cavalera would be playing the opening night of the pudding competition and needed a band. Court felt we were the best choice because of our playing ability and style of metal that we play. He also knew we had been HUGE fans of Max’s for many years! We also know Randy Spencer at the teen center was a big part of arranging this great opportunity for us.” During the evening Ironkill played a total of five songs with Max, ranging from Soulfly to AC/DC to Pantera. Remember you heard it here first; Ironkill kicked some major METAL ass. There was even a mosh pit right in the middle of the center.

Alice himself, broke away from the Motley Crue tour, to be on hand to kick off the evening by further defining the vision he and his wife Sheryl have for their faith based organization citing that their primary mission is to make an everlasting difference in the lives of teens by helping them meet the spiritual, economical, physical, and social needs of at-risk teens (we believe all teens are at risk) in the community by offering a safe, engaging environment during non-school hours a time when they are most vulnerable to drugs, violence, and gangs. Here are just a few staggering facts: 135 children take a gun to school every day in the United States, 1640 children died in 2012 of neglect or abuse, 50% of teens in shelters said their parent told them to go away, and the most shocking statistic of all suicide is the 3rd leading cause of death in the United States in teens between 15 and 24 years old. 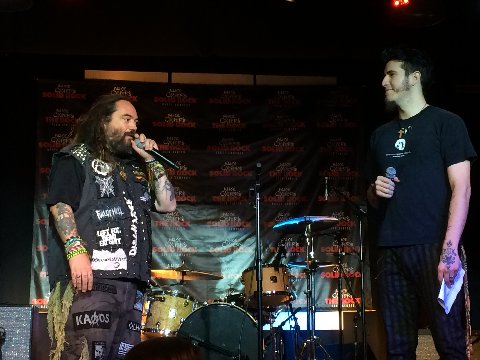 After playing with Ironkill to a tremendously packed teen center, Max graciously did and question and answer session with Court Stumpf. As I looked around the room I saw the kids listening intensely as Max spoke of what it was like to grow up in Brazil. He told stories of his childhood, and what it was like to work to be an aspiring metal artist in the Brazilian culture and the difference of the music industry in America.
When the question and answer session was over, Max made his way into the audience, he spoke to and took pictures with every single person in the entire building, including me( see below) He did not rush anyone he patiently stood and engaged in conversation with all of the teens, that adore him, perhaps the next generation of the tribe. 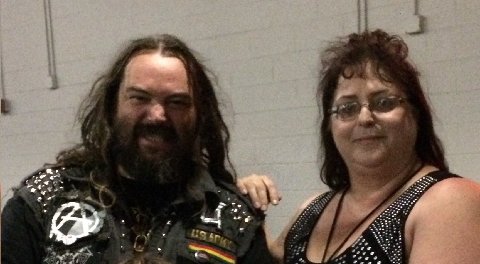 In fact by the time Max actually began to make his way out, the chairs were literally being folded up and put away, the stage set was being torn down, the hall was slowly emptying out completely. There is no “Elvis has left the building” when it comes to Max and meeting his fans. He is as loyal and dedicated to ‘The Soulfy Tribe” as they are to him.