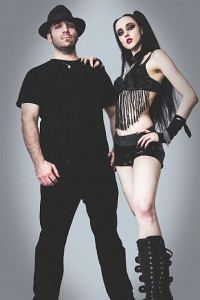 What do you get when you cross Lily Tomlin, the variety show antics of Carol Burnett, brilliant musical production and a guitarist featured as one of the Twenty Most Extraordinary Female Guitarist in Guitar Player Magazine? You get One- Eyed Doll!

Kimberlee recently stated that analytics showed One-Eyed Doll appeals to more of an all-ages group, rather than a straight over 21 bar crowd. From what I saw live this band appeals to ABSOLUTELY EVERYONE! There were parents with teenaged kids, young adults in their 20’s, people I see at all the metal shows, in fact I was at the front of the stage sandwiched in between a big buff biker metal head Slayer kind of guy on my left, and a transgender or transvestite 6’3 in heels on my right side that is pretty damn diversified if you ask me!

Instantly you got that childlike feeling of Lily Tomlin sitting in her giant oversized rocking chair(am I dating myself here?) every time Kimberlee Shouted out “It’s story time.” But also like watching Lily, you couldn’t wait to see what story Kimberlee would tell next, or what song the story would lead you into. Because as we all know every song tells a story. During the show Kimberlee would go to her giant magic trunk, and put on different hats or accessories to enhance her stories. I suddenly felt like I was in the middle of the Carol Burnett Show. One -Eyed Doll is a mixture of variety, storytelling, bad ass Nancy Wilsonish guitar playing and refreshingly new innovative music.

When I discovered this band was only a two-piece band I was quite skeptical, about their performance. Now that I have experienced a One-Eyed Doll show, allow me to clarify, this two piece band has a HUGE sound, in fact you don’t even really miss standard bass player, and 2nd guitar player not being present on stage. This show is not only a band playing music but it is true performance art live.