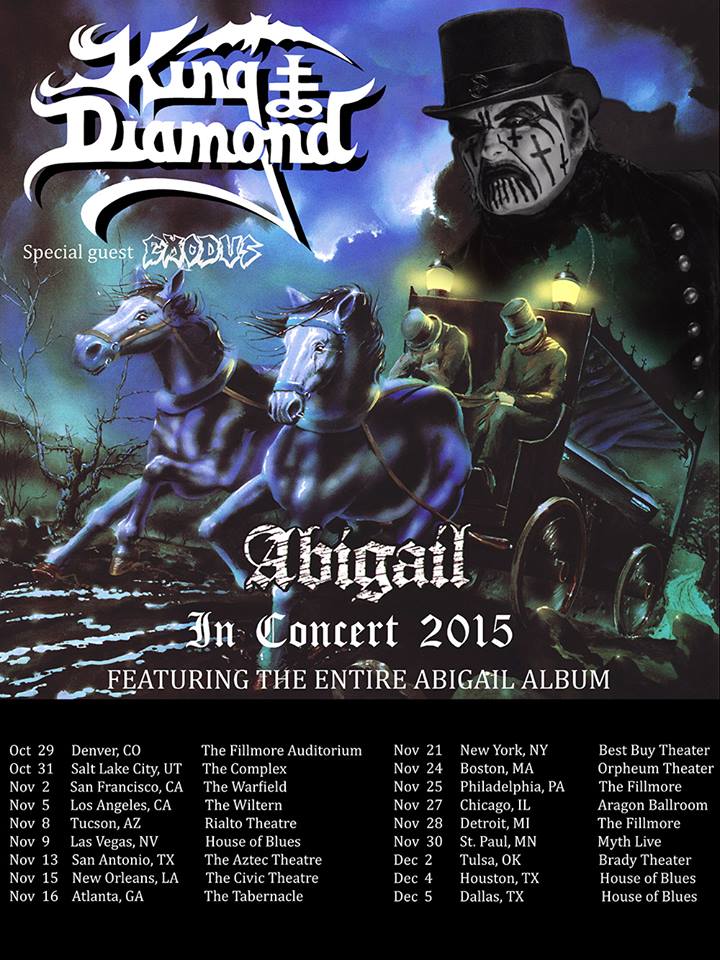 Thrash metal giants EXODUS are very pleased to announce their upcoming support of headliners King Diamond on their forthcoming “Abigail In Concert 2015” U.S. tour. The tour begins in Denver, CO on October 29th and tours throughout the contingent states, coming to a close in Dallas, TX on December 5th. This tour will feature King Diamond performing their classic 1987 album Abigail in its entirety each night. The general on sale for tickets begins this Friday, August 7th at 10am ET – don’t miss this rare experience!

EXODUS vocalist Steve “Zetro” Souza states, “EXODUS is truly honored, excited and flattered to share the stage with King Diamond, and his amazingly talented band! I remember in ’86, we performed some shows together and they were everything you’d expect a King Diamond and EXODUS show to be! Don’t miss this – it’s going to be epic!”

Next month, EXODUS will take part in the Motörhead’s Motörboat Cruise, departing from Miami, FL on September 28th. Motörhead’s Motörboat offers guests a once-in-a-lifetime opportunity to share an experience with their favorite bands and to see unforgettable performances on various stages throughout the ship and on the island of Great Stirrup Cay. The full lineup for Motörhead’s Motörboat is as follows: Slayer, Motörhead, Anthrax, Suicidal Tendencies, Hatebreed, Exodus, Corrosion of Conformity, Phil Campbell’s All Starr Band, Crobot, Motor Sister, KYNG, Brian Posehn, Fireball Ministry, Huntress, Big Jay Oakerson, The Shrine, Others, No Words, Budderside, Sonia Harley, and The Dead Deads.  Visitwww.MotorheadCruise.com to reserve a stateroom.

This year, thrash architects EXODUS celebrate 30 years since the release of their first album, thrash metal’s classic blueprint Bonded By Blood. Keeping with that tradition, EXODUS was joined by their original guitarist,Metallica’s Kirk Hammett, on their most recent release Blood In, Blood Out (2014). In its first week, Blood In, Blood Out doubled the first week sales of their most previous full-length release, in addition to securing their highest charting position ever – #38 on the Billboard Top 200 Albums chart, as well as #2 on the Hard Rock/Metal chart and #6 on the Independent Albums chart.  Blood In, Blood Out gained a strong foothold in European countries by topping several first-week international charts, as well as landing at #6 on Canada’s Hard Music chart. Order the dual-disc Blood In, Blood Out digi-pak from http://smarturl.it/EXODUS-Blood.

“Blood In, Blood Out” is the latest video by EXODUS.