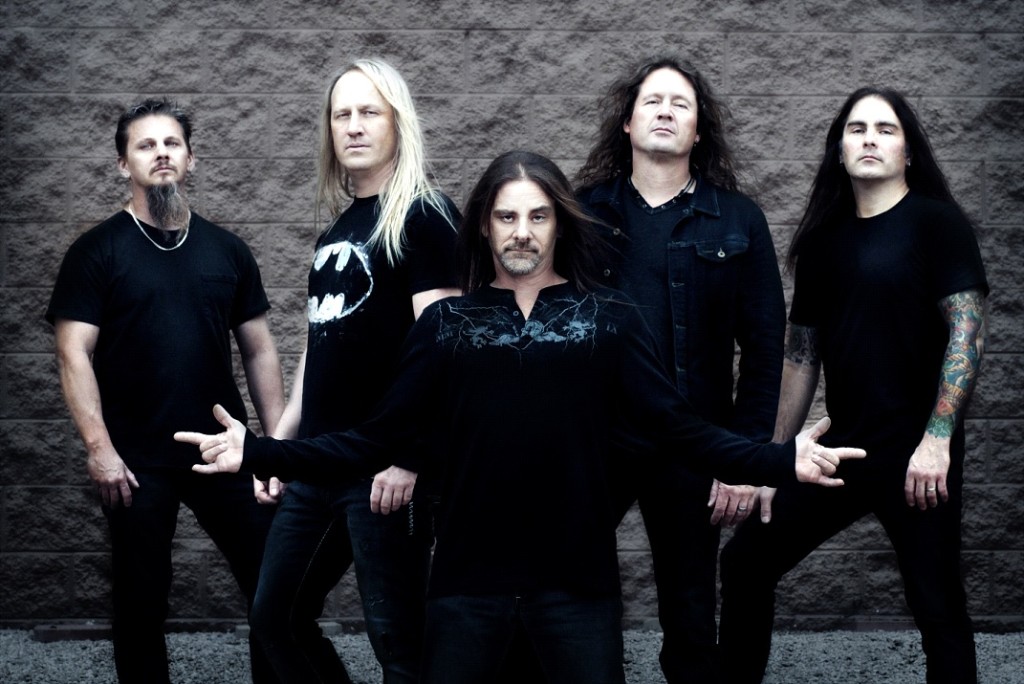 In my lifetime I have probably seen Flotsam and Jetsam, several thousand times. A.K. and I grew up together; I met the rest of the original guys in high School or shortly after. I was there at the first Flots show ever, and also present at the last show they have played in the U.S. so far for 2015. So hear me when I say…. Flotsam’s live show was spot on. Thirty years into it and still kicking Metal ass. The sound was run incredibly…crystal clear….. hats off to Mr. Scott Goody.

This was the first show with new drummer Jason Bittner, who reigns from Shadows Fall. When I heard Kelly Smith was leaving Flotsam (again), I was instantly concerned about who would fill his shoes. Truth be told I never was very impressed with previous drummer Craig Neilson, and was hoping they would find a better fit for their music this time. During the show it dawned on me Jason’s live performance fits Flotsam like a glove, familiar and comfortable. I had to actually remind myself that Kelly Smith was not playing. It will be interesting to see once the writing/ recording begins for the new album, what metal inspiration Mr. Bittner will bring to the Flots table. For now what would be great to see at the next Flotsam show would be a killer drum solo.

Eric A.K.’s vocals were literally mind blowing from start to finish, including his little impromptu a cappella song to occupy the audience, while they suffered through a small amount of technical problems. I would like to insert a request here…. Can we hear an a cappella version of Trash, next time? The mark of a true performer is someone who doesn’t miss a beat in keeping the audience entertained, regardless of what issues are going on, AK is that quality of a performer. “She took an Axe” kicked major vocal ass, this song has an extremely difficult vocal range at the end, so to be able to nail it 30 years later was quite impressive to witness.

Guitarist Steve Conley keeps a nice rhythmic balance going throughout the show. I think the future possesses room for Steve to grow within Flots. But for now while they are still touring to support Ugly Noise, which features original guitarist Ed Carlson ,coupled with the fact that fans are still grieving the loss of Ed leaving the band, it is tough for Steve to shine through the shadow of Mr. Carlson entirely. Perhaps when the new album is made, and it is a musical compilation of the current members of Flots, then it will be Steve’s time in the spotlight.

Bass Player Michael Spencer is going for round 2 in the Flotsam ring. He is by far a more subdued bass player musically then the (threw his neck out head banging so hard while playing) Jason Newsted or the (play until my fingers are shredded and bleeding profusely) Jason Ward. Michael’s playing and command of the bass has undeniably matured from the first time he was in the band.

Guitarist Michael Gilbert is undeniably phenomenal, a Master Chef in the kitchen of guitar playing. Watching him play I was simply in awe that the seasoned exquisitely talented guitarist on stage tonight is the same guy, I first saw play at age 16 for a high school desert party. Don’t get me wrong he was great at 16, but now he’s a black belt in guitar.

Their Live performance had every audience member singing along, head banging, moshing, and thrashing. Desecrator, Hammerhead, I Live You Die, Iron tears, Der Furer, and Doomsday all played from the infamous Doomsday for the Deceiver album, and orchestrated flawlessly. In fact they played many fan favorites spanning their 3 decades of music including No Place for Disgrace, Escape from Within, Suffer the Masses, and from the new album Giddy-Up, and Ugly noise.
Again it will be interesting to see what will musically develop on the new Flots album coming out end of 2015, with only 2/5 of the original line up remaining. The new music will now encompass a wide variety of input from Mr. Bittner, Mr. Spencer and Mr. Conley, perhaps Flotsam is about to evolve into a new musical level. All I know is the suspense is killing me and I can’t wait to wrap it around my ears around it as it debuts.